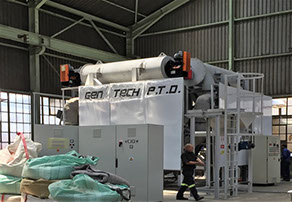 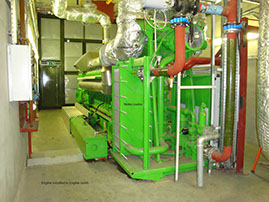 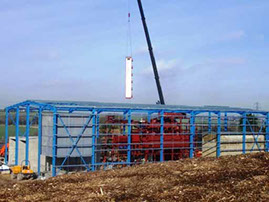 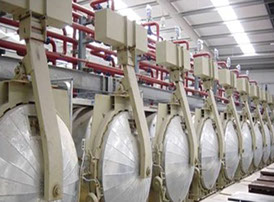 WASTE TO ENERGY TECHNOLOGY AND EQUIPMENT

This process incorporates several innovative technologies, four of which have patents. The operating principle of this technology is to pre-process the waste to remove recyclables, non-convertible inerts and excess water, then generate an intermediate gas or liquid fuel from the incoming waste by means of pyrolysis. This intermediate fuel is cleaned and then used in engines to produce electricity.

Since the C6 Ireland1 Project will be receiving an RDF fuel the Project will take fuel directly into macerators which will reduce it to the appropriate size and from there to the dryers.

Waste reception will be dictated by the location of the facility and waste types and is likely to be trucks delivering various forms of waste, the most common being Municipal Solid Waste (MSW).

The size of the waste must be such that it can fit in the autoclaves, dryers and pyrolyzers, therefore large items such as mattresses and tires need to be reduced in size via a shredding process.

For projects taking in raw MSW, waste will pass through the autoclave, which utilizes heat, steam and pressure to sterilize the waste. There is no need to either pre-shred or open trash bags prior to loading into the autoclave as the internal agitation in this unit performs this function. The C6T autoclave process gives a very high pathogen and virus kill rate.

Note: tires, wood and certain other feedstock do not require sterilization.

The autoclaves are considered the elegant solution for processing raw MSW. However, the Project will be receiving only the energy fraction of MSW which will be delivered to the waste reception hall   without recyclables or contaminants (metals, glass building, rubble etc).

Sterilized recyclables such as glass, ferrous and non-ferrous metals are removed, and non-pyrolyzable materials such as aggregates are also removed. Depending on local market conditions, sterilized plastic can be removed either for resale, for conversion to on road diesel fuel and naphthas, or it can be used for its energy value as part of the feedstock being converted to electricity.

Pyrolysis feedstock is passed to the dryers. Excess moisture in the feedstock is removed before it is sent to the pyrolyzer.

Following the drying processes, waste is homogenized and reduced in size to less than 4mm. In some instances, the reduction equipment may be positioned before the dryer.

At this stage the dry, input, commonly known as Refuse Derived Fuel (RDF grade 3, or “fluff” RDF), is fuel for the pyrolyzer.

The project will be receiving RDF. However, it is anticipated that the fuel will still need to pass through a dryer to reduce moisture content before entering the pyrolyzer.

Pre-Conditioning: various processing treatments are carried out on the waste in preparation for pyrolysis. The process or processes required are be dependent on the nature of the waste.

Pyrolysis: Once treated, the feedstock is passed into the pyrolyzer. It uses a high temperature in the absence of oxygen to convert waste into syngas. Syngas is predominantly a mixture of methane, hydrogen and carbon monoxide.

Tars, oils, aerosols and “fines” are removed from the syngas using variable condensing temperatures and scrubbing systems. These molecules are then cycled back through the Pyrolyser to ensure they are broken down further. Tars are vitrified along with any residue, providing the heat input to the Pyrolyzer, avoiding the use of the syngas for this purpose, and increasing overall project efficiency.

Clean syngas is passed from the pyrolyzer either directly into an engine with a generator set or using a turbine to generate electricity. The electricity generated by gas engines and/or turbines is exported to the grid.

Combined exhaust from the dryers, pyrolyzers and engines is progressed through a regenerative thermal oxidizer, ensuring that the final exhaust discharge to atmosphere meets worldwide emissions acceptance criteria. 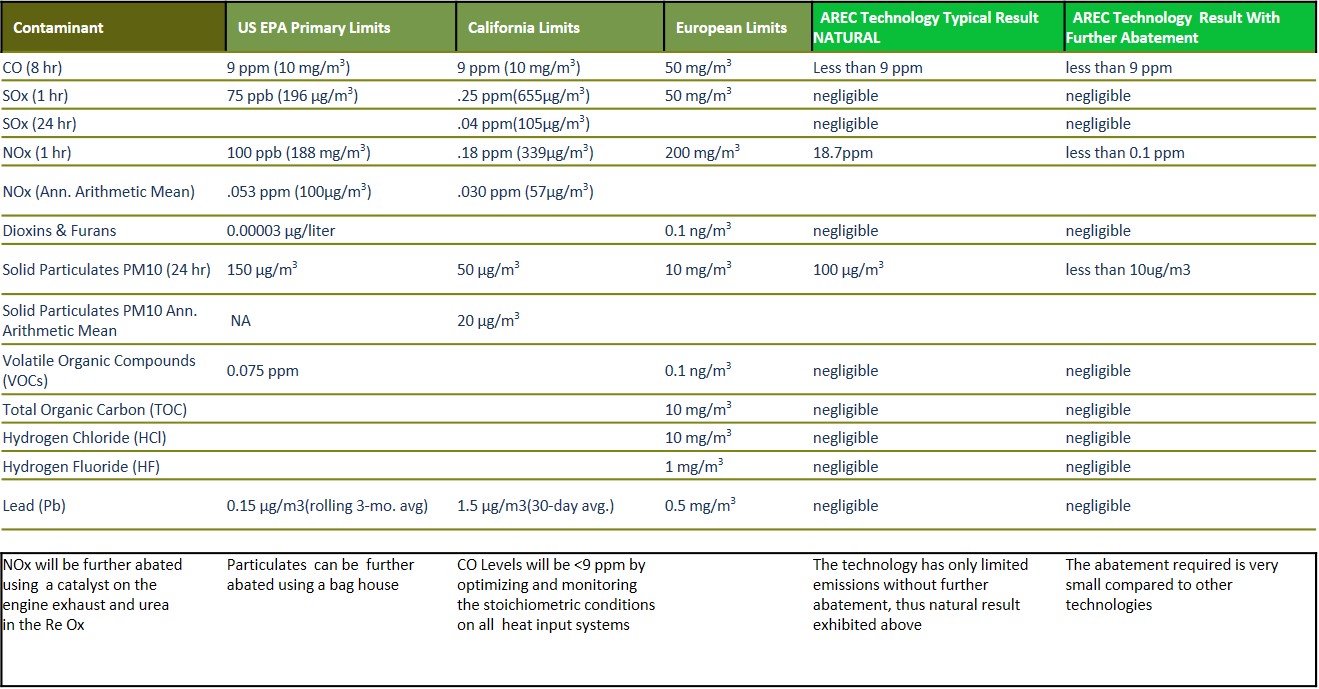 Disposal or Sale of Residue

Any further outputs from the process, such as inert residue, are transported from the site to the relevant customer. Uses for inert residue including road surfacing and brick making. Typically, the inert residue is approximately 11% of the initial raw input by weight.

Advanced thermal conversion techniques used to generate renewable energy from waste should not be confused with traditional mass-burn incineration or gasification. Pyrolysis is dissimilar to burning, which requires oxygen. Waste to energy using an advanced thermal conversion technique is a "clean, reliable, renewable source of energy," according to the US Environmental Protection Agency. A basic explanation of the chemical reactions taking place is given below.

Pyrolysis is an advanced form of gasification that takes place at elevated temperatures in the absence of oxygen. Pyrolysis can treat many different organic and hydrocarbon-based wastes. Pyrolysis produces a clean fuel gas mixture of methane, carbon monoxide and hydrogen called “syngas”. The syngas will typically have a calorific value of 19 - 30 MJ/m3 depending on the waste material processed. The lower calorific value is associated with biomass waste, the higher calorific value with wastes such as rubber and oil sludge. Syngas burns more efficiently and cleanly than the waste from which it was made and is suitable for use either in gas engine or steam turbine applications to generate electricity. Pyrolysis is the core technology deployed in PTE’s plants.

The main components that make up the plant are:

• Waste preparation including macerators and dryers.

• Pyrolysis, where pyrolyzers turn the feedstock into syngas

• Gas clean up equipment that scrubs the gas

• Electrical generation equipment where the syngas is used to power engines to generate electricity.

• The Project is a Combined Heat and Power (CHP) project. In addition to generating electricity, the processing of energy fraction material from MSW generates excess heat and warm water. These are used to power steam turbines to produce additional electricity.

• Output handling, where recyclables and residue exiting the process are aggregated and dispatched for sale or disposal.

• Various ancillary machines and pieces of equipment such as conveyors, boilers, gasometers, etc

The power output of the Project based upon the waste stream will be marginally less than 10MW.

The plant architecture is focused on simplicity, standardization and reliability. Each plant has a standardized layout, shown below, which results in a simple and well-organized arrangement that maximizes ease of construction and operation. 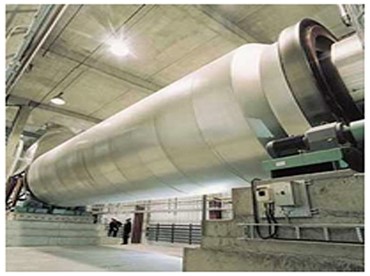 Dryers are used to reduce the moisture content to a predetermined range and thereby increase pyrolyzer efficiency. Recycled heat from the engines is used to minimize feedstock drying costs and increase overall Project efficiency.  The dryers can process all materials e.g. cellulose fibre from autoclaves, wood waste, etc. and achieve accurate output moisture content by monitoring and controlling the exhaust.

An efficient twin drum design allows loading and unloading from one end and reduces the unit’s overall length. Material handling through a sealed hopper and auger eliminates dust. An extremely reliable four-wheel drive rotates the dryer so that internal tumblers and compression plates homogenize any feedstock.

This patented piece of equipment is at the heart of the C6T advanced recycling and energy conversion process. The dried cellulose fibre material is thermally decomposed at high temperature in the absence of oxygen (non-burn) to produce syngas. The pyrolysis process takes place at a temperature in excess of 900°C.

The material then passes through to the pyrolyzer unit, which also consists of a totally sealed inner unit surrounded by a heated outer vessel. After initial start-up using external fuel, the pyrolyzer is heated to a temperature of 950oC using a small quantity of the syngas that it generates. The system is very efficient with a parasitic load of around 10%, vs. competitive systems that typically consume 25% of the power produced.

As the material moves through the chamber, angled distribution plates control the retention time in the system. Multiple offtake points allow the composition of the gas to be precisely controlled. The syngas produced has a very high calorific value (CV), typically 22 MJ/m3, compared to competitive systems that typically achieve less than 8 MJ/m3. A high volume of gas and thus electrical energy is generated, typically 1.1 MW per ton for materials with nominal CV of 16 (competitive systems achieve less than 0.7MW/ton).

The design of the equipment involves no high-temperature moving parts (unlike competitor rotary kiln-type designs) and ensures no gas leaks. All carbonaceous material is converted with no char remaining (unlike gasification) and no fines are carried over to the gas clean-up system. The system is very thermally efficient, remaining low-grade heat is used to preheat air going to the burners and pyrolyzer exhaust is used to heat the preconditioning system. The entire system can be pre-assembled to minimize site construction. 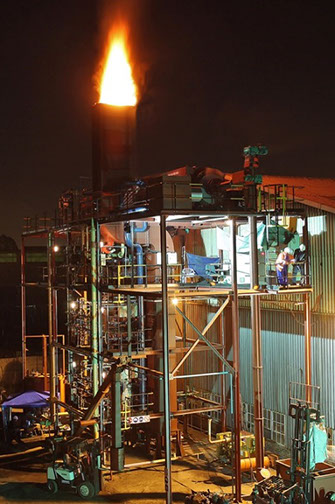 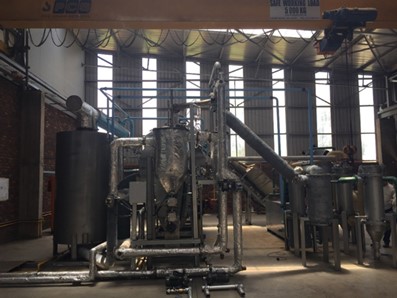 Syngas is passed through condensers which are designed to ensure that all entrained tars, waxes and oils ‘fall out’ of the gas stream. There are no discharges of tar, oil or wax from the process. The condensers are periodically back flushed to remove the tars, oils and waxes and the wash liquid is reintroduced into the pyrolyzer to ensure these molecules are further broken down.

The syngas is then cooled within two wet scrubbers of counterflow direct contact design, which use a water spray to remove the “fines”, thereby preventing damage to the downstream equipment and reducing particulate emissions. The temperature of the syngas as it exits the scrubbing system is between 40°C and 15°C. Finally, the scrubbed syngas is stored under pressure in the gasometer storage tank and is available to power gas engines to generate electricity.

Exhaust gases from the dryers, pyrolyzer burners, engines and turbines are sent to regenerative thermal oxidizers to remove pollutants to a level of less than 16 parts/million. Most Environmental Agencies require all air emissions to be heated to 850oC for more than 2 seconds, typically requiring high energy consumption.

The C6T design reduces energy consumed to approximately 15% of competitive designs. This is accomplished by using a bi-directional design: gases acquire heat from a ceramic bed at one end and deposit it at a bed at the other end prior to discharge to the stack. Flow is reversed every 90 seconds to allow the previous exit heat sink to heat the incoming gases. The last 15% of the required heat is supplied by syngas produced by the pyrolyzer.

The unit removes all volatile organic compounds and easily meets the EU environmental emissions laws, as well as US EPA regulations. It operates effectively from full load to a fraction of output. In the event of high concentrations, NOX can be reduced by 90% and neutralizers can be added to treat otherwise difficult compounds. 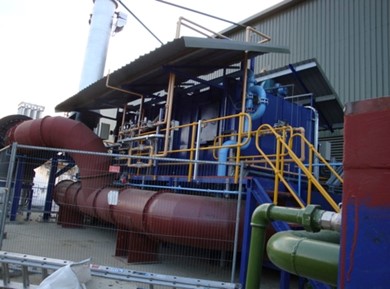 Continuous emissions monitoring equipment (CEMs) is located on the exhaust stack, which is the sole emissions point of the plant. Emissions will conform to all local and federal regulations and standards. The CEMs monitors all contaminants and emissions as required by EPA regulations.

The CEMS operates continuously on a 24-hour basis and will include a facility for on-line monitoring of gas concentrations and provide that notifications of any out-of-tolerance indications are sent to both on and off-site staff. The CEMs equipment is subjected to an annual surveillance test. Parallel calibration with the reference methods occurs at least once every three years. Automated reports from the CEMs will be made available to EPA inspectors. Periodic measurements of non-continuously monitored pollutants and heavy metals will be undertaken in accordance with the timescales laid down by the authorities within the Environmental Permits.

PTE's Presentation Offices are located at:

PTE's Testing Facility is located at:

PTE's Laboratory is located at:

PTE's Demonstration Facility is located at: